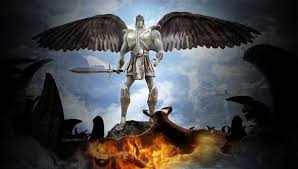 Archangel Gabriel ~
Gabriel's name means 'God is my strength. Gabriel is the Angel of child conception or the process of adopting a child. This archangel also helps anyone whose life purpose involves art or communication. Defender of the Element of Water and of the West. The Angel of resurrection, mercy and peace and benefactor of " messengers". Purity, rebirth, creativity, prophecy, purifying your thoughts, body and emotions.Communication & the Arts. Patron Angel of all who work in the field of communications. postal workers, and clergy.
Gabriel (Hebrew: גַּבְרִיאֵל, Modern Gavri'el Tiberian Gaḇrîʼēl, God is my strength; Arabic: جبريل, Jibrīl or جبرائيل JibrāʾīlIn the Bible, Gabriel is mentioned in both the Old and New Testaments. In the Old Testament, he appeared to the prophet Daniel, delivering explanations of Daniel's visions (Daniel 8:-vs-5–26,-and- 9-vs-21–27). In the Gospel of Luke, Gabriel appeared to Zecharias, and to the virgin Mary foretelling the births of John the Baptist and Jesus, respectively (Luke 1-vs-1–38). In the Book of Daniel, he is referred to as "the man Gabriel", while in the Gospel of Luke, Gabriel is referred to as "an angel of the Lord" (Luke 1-vs-11). Gabriel is not called an archangel in the Bible.

Gabriel is interpreted by the Rabbanim to be the "man in linen" in the Book of Daniel and the Book of Ezekiel. In the Book of Daniel, he is responsible for interpreting Daniel's visions. Gabriel's main function in Daniel is that of revealer, a role he continues in later literature. In the Book of Ezekiel, Gabriel is understood to be the angel that was sent to destroy Jerusalem. According to the Jewish Encyclopedia, Gabriel takes the form of a man, and stands at the left hand of God.]Simeon ben Lakish (Palestine, 3rd century) concluded that the angelic names of Michael, Raphael, and Gabriel came out of the Babylonian exile.

In Kabbalah, Gabriel is identified with the sephirot of Yesod. Gabriel also has a prominent role as one of God's archangels in the Kabbalah literature. There, Gabriel is portrayed as working in concert with Michael as part of God's court. Gabriel is not to be prayed to; because only God can answer prayers, and sends Gabriel as His agent.

According to Jewish, in the garden of Eden there is a tree of life or the "tree of souls" that blossoms and produces new souls, which fall into the Guf, the Treasury of Souls. Gabriel reaches into the treasury and takes out the first soul that comes into his hand. Then Lailah, the Angel of Conception, watches over the embryo until it is born.

The trope of Gabriel blowing a trumpet blast to indicate the Lord's return to Earth is especially familiar passages. However, though the Bible mentions a trumpet blast preceding the resurrection of the dead, it never specifies Gabriel as the trumpeter. Different passages say different things: the angels of the Son of Man (Matthew 24-vs-31); the voice of the Son of God (John 5-vs-25-29); God's trumpet (I Thessalonians 4:-vs-16); seven angels sounding a series of blasts (Revelation 8-vs-11); or simply "a trumpet will sound" (I Corinthians 15-vs-52).

He is a powerful and strong Archangel, and those who call upon  God to activate him will find themselves pushed into action that leads to beneficial results. Gabriel can bring messages to you just as he did to Elizabeth and Mary of the impending births of their sons, John the Baptist and Jesus of Nazareth. If you are considering starting a family, Gabriel helps hopeful parents with conception or through the process of adopting a child-or-being barren in your womb spiritually. Ask God to send and activate Gabriel if your third eye is closed and your spiritual vision is therefore blocked. If you need to obtain visions of Angelic guidance regarding the direction you are going in. If you need to obtain prophecies of the changes ahead. If you need help in interpreting your dreams and vision.

Gabriel helps anyone whose life purpose involves the arts or communication. He acts as a coach, inspiring and motivating artists, journalist and communicators and helping them to overcome fear and procrastination.

Gabriel also helps us to find our true calling. Ask for God to send Gabriel's guidance if you have strayed from your soul's pathway, if you need to understand your life plan and purpose. He can also help if you can find no reason for being or if changes are ahead and you need guidance. If you are contemplating a house move, major purchase or thinking of changing careers.

Call Gabriel if your body is full of toxins and needs purifying and if your thoughts are impure or negative and need clearing and cleansing. Gabriel is also very helpful for women who have been raped or sexually assaulted and feel dirty as well as being under psychic,witchcraft, and demonic attacks or if you feel that you have absorbed someone else's problems.

First Previous of 5 Next
This reply was deleted.