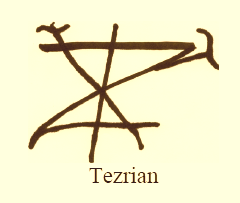 In order to know how to fight against what you can not see you must know what your up against. Early this morning I was studying and I came across this and I wanted to share. We must be aware of the enemy and his signs.
This is the sign of Tezrian who is the goddess of war and priestess of battle. She is held to be a spirit of vengeance who rules, upheaval, bravery, combat, conflicts, and strength of will. She can be called upon for hateful rules of execration, but she can grant wisdom and power.
She helps the witch to learn martial arts especially involving weapons and it is apt to have weapons present during rites to her. She is destructive and a devourer her horrible fangs strength long and thick from a black t-rex like mouth which extends from behind her beautiful visage. Terzian is an incredibly powerful goddess of plague, death, terror, and cruelty. She obliterates the most sacred rights to her victims and divests them of their self-understanding, destroying their ability to function as people, let alone professionals. Her will is the causation of violence whereby the human race is strengthened, she will empower those who enact her will.
If we do not know our opponent how are we to fight? Does this spirit not roaming the earth now?
Views: 3
★
★
★
★
★
Votes: 0
E-mail me when people leave their comments –
Follow