My God My God; God we come before you with gratefulness; giving Glory to You this day; As we go forth in our daily assignments, we ask you for continuance covering; shielding, surrounding us with your ever loving love. Taking the authority you given, to  come against, pull down, every dysfunctional traits, the entire plot of the no-name, enemy, devil, we cast out all ancient generational curses, gesture of crippling, dragging around dead weight, stiffnesses, stagnation, we know that it is done in Jesus. We speak enthusiastic life, energetic movement into your people this day, that the awakening of creativity comes to light. HalleluYAh. We present salvation on this day, Rom. 10:10 “For with the heart man believeth unto righteousness; and with the mouth confession is made unto salvation”. Thank You, Lord, for the souls, you’ve drawn unto you, and we praise you. We know it’s done in Jesus, Ne’Eman. When we allow things, person or places to have us looking other than straight forward according to God’s plan for us; we are headed toward evil, disobedient, off focus of the divine plan of God. 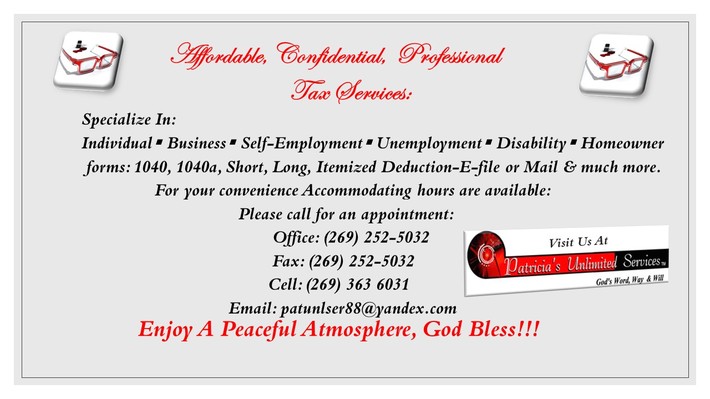 We desire to awaken, stimulate, and release our impossibilities ► to become Possibilities with God through His very Promises.

There are several components, mechanism into building A solid Foundation: Awaking, Recognizing, Faith, Sincerity, Focus, Activating, and Applying, Implementing the very thing God release to us. God released a prophetic vision: “the pilot and his airplane” on the runway ready for its departure, ready to launch out for its destination. It’s all fueled, stewardess, co-pilot all on board and passenger’s bags are in the cargo holding place and passengers are seated. My God! But the pilot of the airplane just sitting there, not moving, the pilot not taking the next step to move forward, he’s not implementing what he has learned, not executing the techniques, using the mechanisms in which is before him. So, the pilot, the plane and all its passenger are in a stand-still, and stagnated position. We have to know that not only are we as the “pilot” are stuck so are the people depending on him to take them to another place. My God in the Kingdom. What are you not doing, who is being stagnated due to your stagnation? My God, YOU hold the key:

Luke 4:18The Spirit of the Lord is upon me, because he hath anointed me to preach the gospel to the poor; he hath sent me to heal the brokenhearted, to preach deliverance to the captives, and recovering of sight to the blind, to set at liberty them that are bruised.

My God, HalleluYAH; this is a great and awesome teaching, thank you Lord; A couple of things that We(Host) caught in the Spirit; the title for one, “the only way that a camel could enter would be to get down on its knees, be stripped of all of it’s baggage and guided carefully through”. My God in the Kingdom. That was seriously words that caught us, we have to bow down, get on our knees and surrender all our baggage and allow that Holy Spirit to guide us in all that we do, My God…Yes Lord, Holy Spirit Sit on me as you sat on them in the upper room, to help me through it all; to release all of my importance to you. We so desire to stay humble, at your feet, with our spiritual ear tuned in. “We must be stripped of everything prior to the Lord granting us permission to enter”. My God, we can’t come to God; enter into His Presence any-oh-way. My God. We accept the challenge; to become more alert in the realm of the Spirit; fine tuning our ears, and remaining disciplined enough to pass through the eye of the needle…HalleluYAH..Bless You Spiritual Grandmother Bishop Boatwright; we hear and obey. My God…Love You Much!!!

Are you writing the vision, plan, the script? My God; Are your words lining up with your actions? This is what is needed, hard questions, We(HOST) need to ask ourselves. Are your actions in corresponding with your words. Are we in Alignment, in Position? We have to recognize that there is more required of us, are we ready for the NEW?

When we find ourselves in difficult situations, no worries, for the word of God says in Isaiah 43, I Am With You!!!

This is walking by Faith, allowing Faith to be in correspondence with our Words, our Actions. HalleluYAH... 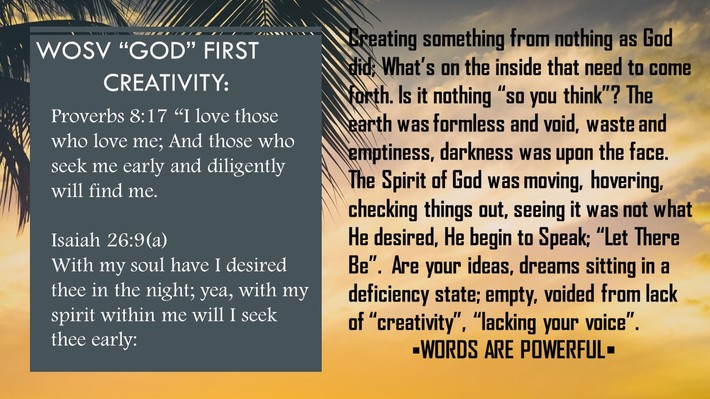 Genesis 1:1 Heb bara. Here and in 1:21, God created from nothing which is something only He can do. In 1:27, God used preexisting materials (man from the dust of the ground; Eve from Adam’s rib); each use of the word bara (“create”) must be considered in its specific context. 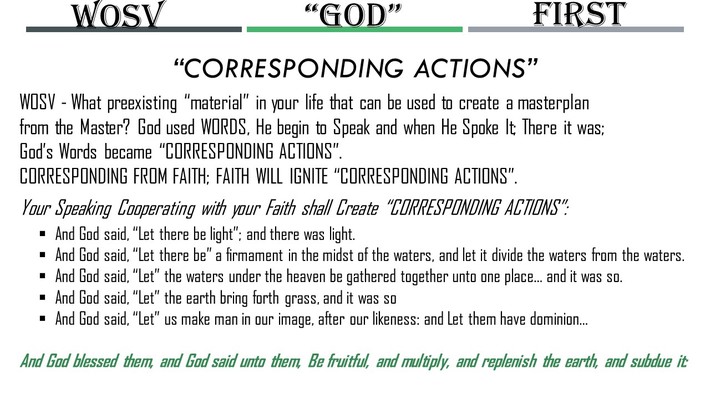